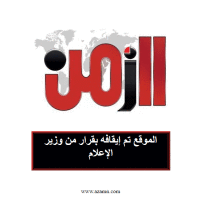 Muscat (WAF) – The Supreme Court in Oman upheld today the ruling of the appeal court and the court of the first instance to permanently close down Azamn newspaper.

“The Supreme Court decided to close Azman permanently”, Zaher Al Abri one of the three journalists involved with the case posted today on his Twitter account.

In September 2016, a court in Oman sentenced three journalists and closed down Azamn newspaper on charges that included undermining the prestige of the state after reporting on alleged corruption within the judiciary.