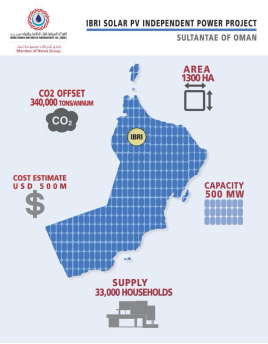 Muscat (WAF): Oman’s largest solar utility project tender will be floated early next year, to be the first Independent Power Project (IPP) working on renewable energy in the country with an estimated capacity of 500MW. The state-owned Oman Power and Water Procurement Company (OPWP) announced today in a press conference starting the qualifications process before floating the tender by the first quarter of 2018. 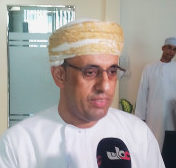 OPWP’s CEO Yaqoob al-Kiyumi told reporters that the new milestone will be spread over 1,300 hectares, and will be located in Ibri, 300km west of Oman’s capital, Muscat. And will supply to around 33,000 houses.

“The estimated capital expenditure for the project is $500mn. And will be built, owned and operated by the private sector”, al-Kiyumi told media. He added that this project will pave the way for other renewable utility projects, and will enhance the contribution of renewable energy in the total energy generated to account for 10 percent of the total power generated by 2025.

Al-Kiyumi also highlighted the preparatory work between OPWP in coordination with the Environmental Service Holding Company (Beah), for the first waste-to-energy project with an estimated capacity of 50-60MW to be located in al-Batinah South Governorate north to the Omani capital.

Oman Power and Water Procurement Company is a subsidiary of Nama Group (The Electricity Holding Company), and the sole buyer of power and water for all Independent Power Producer, and Independent Water producers within the Sultanate of Oman