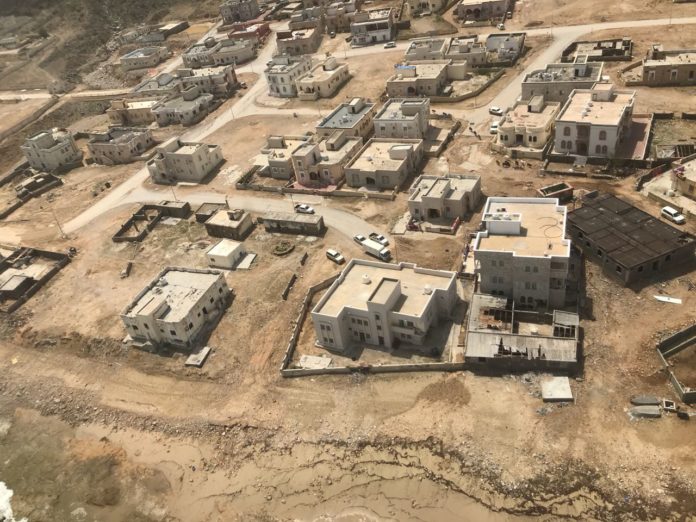 Only a week ago, the Category-2 Cyclone Mekunu rolled into the southern governorates of Oman. Close to 8000 were forced out of their homes, hundreds of patients relocated in hotels or hospitals in the northern cities of Oman, Salalah airport and seaport were shut-down, and most of the main roads were flooded and blocked completely or partially. Yet the trending hashtag, on social media, was “Oman is ready”

The storm is over. Dhofar and al-Wusta are licking their wounds, and trying to get people’s lives back to normal. After Cyclone Mekunu faded away with less than 10 recorded deaths, the southern governorates started to recover.

It was quiet at Salalah’s branch of Oman Chamber of Commerce and Industry on Monday morning. And WAF was at the control centre where volunteers from the private sector, municipal council members, and businessmen left their homes and families to operate the situation from the chamber of commerce.

“By May 27th, in Salalah only there were 1,698 people, mostly Omanis, staying in shelters. The number has dropped from 5,000-7,000 since Friday”, said Eng. Said Bin Salim al-Huraizi Rapporteur of the Main Committee coordinating relief efforts in Dhofar. “But figures in other governorates are still unavailable as they are out of reach”, he added.

Municipal Council member Mohammed Kashoub said that free accommodations are being provided in a number of hotels apartments for the victims.

However, he pointed out that Sadah is still disconnected and water and electricity have been cut off for more than four days.

“Western part like Dhalkout and al-Mughsail are suffering the same losses. No roads lead there and we are thinking of sending aid via sea through Raysut port if it is safe,” Kashub explained.

“It is not the rescue team who saved lives, but people themselves who with -God’s grace- responded to the warnings, supported each other, and stayed patient,” he added, while pointing out that neighbours shared food and houses to stay together during the hard times.

Al-Hallaniyat Islands were the first to be evacuated on May 23rd. But soon after, residents of coastal cities and villages in Dhofar and al-Wusta governorates were asked to head to shelters and the dedicated accommodation centres. “The total number of people who have been accommodated in the Dhofar accommodation centres was 7,300, of whom 10 per cent are Omanis” the Ministry of Social Development (MoSD) said on May 25th . MoSD added that more than 500 expatriates are accommodated in al-Wusta governorate, and more than 200 patients are sheltered in hotels in Muscat with the required medical support.

With 45 per cent expatriate population in Oman, “Humanity first”, a comment went viral along with a video of a rescue team asking a group of expatriates to join the dedicated accommodation centres  while saying “repeat (my wards) ten times in Bangladeshi, No need for an (ID) card, a passport, nor a visa. You will get food and shelter for free. Just ask everyone to come (with us)”. By end of April, the Bangladeshi community in Oman is the biggest compared to other non-Omani nationality in the country with 682,702 according to the monthly bulletin by the National Centre for Statistics and Information (NCSI).

“What expatriates did during the crisis was just amazing. We had a group from Kerala (India) that volunteered all night during the cyclone to help us. So we have priority to expats during evacuation as it felt like our responsibility as hosts to keep them safe,” Omar al-Shanfari, head of Dhofar Voluntary Committee told WAF while dealing with the aftermath of Cyclone Mekunu.

The West is NOT Lost

“The damages to the Western part of Dhofar are the worst, and they still seal with losses compared to other cities”, Dr. Abdulla al-Amri, a member of Oman’s elected branch of the parliament (al-Shura Council) said a week after Mekunu.

Al-Amri, who represents the state of Sadah in Dhofar at al-Shura Council, said that the Western part, all the way to the boarders with Yemen, was completely cut-off.

“The situation is horrifying. 70 per cent or more of the houses are badly damaged. And most of those who still take shelter in schools or mosques are from that part of Dhofar. But, their spirits are high!” al-Amri said.

He added that roads leading to that part of Dhofar were being restored starting from Wednesday, and that most of the streets are clear for traffic but still risky given the harsh nature of that area.

Al-Amri pointed out that number of medical facilities didn’t have emergency power generators, like other cities and states such as Sadah and Salalah. As a result, these facilities in the Western part of Dhofar couldn’t perform after the storm was over. He complemented the efforts to evacuate hundreds of patients before the cyclone reached Dhofar, which helped saving many lives, but called for emergency power generators to be permanently available at these medical facilities across the country.

Al-Amri said that the basic services are being restored gradually in all cities. But the percentage from one location to another differs in a range of 60-90 percent in power and water. While telecom services are restored fully in almost all areas.

A Flood of Aid and Support

Once Salalah airport became operational, after 48 hours of shutdown, flights from the Capital Muscat were loaded with food, clothes, and other basic supplies heading towards Dhofar. And dozens of loaded trucks carrying volunteers from across Oman marched to the South as part of an nationwide campaign “Faz’a”, which mean coming to ones aid promptly.

Despite Port of Salalah’s severe damages, the port started operating partially after four days. Along with other close seaports, water, electricity generators, basic appliances, and supplies were being shipped to cut-off villages and remote areas.

A week after the cyclone, prayers, supplies, volunteers, and financial donations find their ways to Dhofar to mend homes, families, and lives torn by Mekunu.