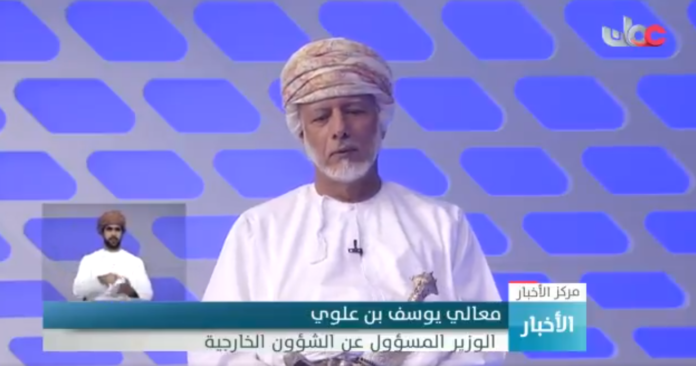 Muscat (WAF): Oman is not playing the role of a mediator between Palestine and Israel but believes that the main role is by the United States to reach a peace agreement in the Middle East, Omani Minister for Foreign Affairs Yousef bin Alawi (YbA) said in a live interview with the Oman TV tonight.

YbA’s interview followed a visit of Israeli Prime Minister Benjamin Netanyahu’s visit to Oman, during which he met with Sultan Qaboos bin Said. YbA said that Netanyahu’s visit, which was preceded by Palestinian President Mahmoud Abbas, came at the request of the Palestinian and Israeli sides.

said in a television interview that the Palestinian and Israeli sides separately listened to Sultan Qaboos’ vision of the issue, and “his vision was welcomed and accepted”

“We are not mediators at all,” he said, pointing out that the role of the Sultanate lies in being a facilitator.

“In our view, the American role is the key role in helping the parties and helping the countries of the region to reach an agreement that satisfies all parties; and gives the region a rest or a chance of relief from conflicts,” added YbA.

Palestinian President Mahmoud Abbas arrived in Muscat on Sunday 21st October in a 3-day official visit, and met with Sultan Qaboos on Monday.  Abbas’ visit -unlike Netenyahu’s- was pre-announced by official media in Oman, including the reception and farewell ceremonies of the Palestinian President.