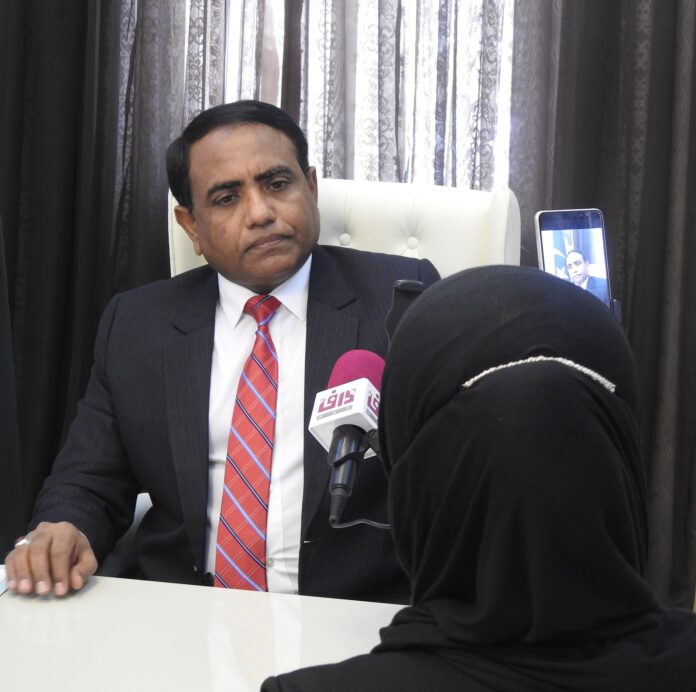 Muscat (WAF): K.K. Ahsan Wagan, Ambassador of the Islamic Republic of Pakistan to the Sultanate of Oman, said that one of his goals over the next two years is to increase trade exchange value between the two countries from about one billion US dollars annually to two billion US dollars.

The Pakistani diplomat’s statements came in an interview with WAF News on the Islamic Republic’s National Day (Pakistan Day). He talked about the current economic relations between the two countries and the sectors targeted for future cooperation.

“Pakistan and Oman possess huge potential in the field of commerce and trade which has not been fully realised. Bilateral trade between the two countries hovers around US$ 1 billion with the balance of trade in favour of Oman,” Wagan said.

In terms of investments, Pakistan’s Ambassador said that the volume of Pakistani companies’ contributions and investments in the Omani economy ranged between “500 and 700 million Omani Rials ($1.3-1.8 billion)”. Some of the most prominent Pakistani-origin companies operating and investing in the Sultanate includes the National Carrier of Pakistan (PIA) and the Pakistan National Engineering Services Company, NISPAK, which contributed as a consultant to “at least 80%” of the major road projects in the Sultanate. In addition to Habib Bank Limited, one of the oldest banks in Oman, Sohar Poly Industries, AZ Engineering Company and, Mian Riaz & Partners. These companies “have made investments in the fields such as trading, real estate, road constructions, manufacturing, education etc.,” Wajan elaborated.

From the Omani side, the Sultanate’s most prominent investment in Pakistan was Oman Telecommunications Company SAOG. (Omantel) acquisition of the majority stake in the Pakistan-based telecom company (WorldCall) in 2008 for $ 193 million (approximately RO 74 million). However, the investment lasted for less than a decade, and the Omani company agreed to sell its share in 2016 and completed the exit procedures in 2017.

During the period from 2008 to 2016, WorldCall incurred losses on an annual basis, except for 2011, in which the company was profitable. The company has returned to profit annually, starting in the fiscal year 2017, according to the annual reports of WorldCall.

Asked about the impact of Pakistan’s unstable environment on the country’s attractiveness of Foreign Direct Investments (FDI), the Ambassador admitted the impact of what is known as the “war on terror” in the wake of the September attacks in the United States. The resulting war in Afghanistan – bordering Pakistan – caused an increase in the number of terrorist attacks and bombings in Pakistan.

“For a decade, we have suffered more than 80,000 lives have been lost, (and) according to the World Bank, IMF, and Asian Development Bank statistics, our economy has suffered more than 100 billion (USD) direct and indirect losses,” Wajan added.

He assured that Pakistan today is “completely safe, secure and a stable country”. As a result, the once-troubled country is now part of China’s One-Road One-Belt plan, which has secured billions of investments into Pakistan.

He added that the new vision of the Pakistani leadership “centred around economic security and its main emphasis has shifted from geopolitics to geo-economics.”

Pakistan now concentrates on optimally utilising its geo-economics location – at the crossroads of the Middle East, South and Central Asia – to advance national economic development goals. The Narrative of New Pakistan offers itself as an economic hub for “positive global interests”.

Pakistan’s economy is backed by a large population of 220 million, of which youth (under the age of thirty) constitutes 60%. The country focuses on the three pillars of connectivity, providing economic bases as a development strategy, and peace within its borders and beyond.

On the other hand, he is set to encourage Pakistani investors to take advantage of the Sultanate’s recently-announced Stimulus Economic Plan. With the main interest in the targeted sectors for economic diversification.